A WRITING ACTIVITY: ARE YOU THERE HUMANS? IT’S ME, PLASTIC. | AMBL

Posted by Mike Christie | September 24, 2008 | ELEMENTARY, RESOURCES | No Comments
0
(pdf of this activity is available for download by clicking here) 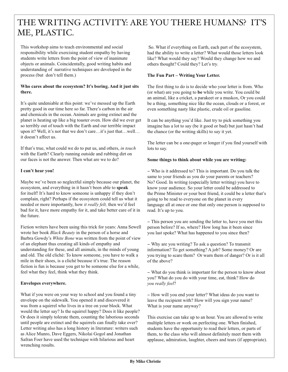 This workshop aims to teach environmental and social responsibility while exercising student empathy by having students write letters from the point of view of inanimate objects or animals. Coincidentally, good writing habits and understanding of narrative techniques are developed in the process (but don’t tell them.)

Who cares about the ecosystem? It’s boring. And it just sits there.

It’s quite undeniable at this point: we’ve messed up the Earth pretty good in our time here so far. There’s carbon in the air and chemicals in the ocean. Animals are going extinct and the planet is heating up like a big toaster oven. How did we ever get so terribly out of touch with the Earth and our terrible impact upon it? Well, it’s not that we don’t care…it’s just that…well…it doesn’t affect us.

If that’s true, what could we do to put us, and others, in touch with the Earth? Clearly running outside and rubbing dirt on our faces is not the answer. Then what are we to do?

I can’t hear you!

Maybe we’ve been so neglectful simply because our planet, the ecosystem, and everything in it hasn’t been able to speak for itself! It’s hard to know someone is unhappy if they don’t complain, right? Perhaps if the ecosystem could tell us what it needed or more importantly, how it really felt, then we’d feel bad for it, have more empathy for it, and take better care of it in the future.

Fiction writers have been using this trick for years: Anna Sewell wrote her book Black Beauty in the person of a horse and Barbra Gowdy’s White Bone was written from the point of view of an elephant thus creating all kinds of empathy and understanding for these, and all animals, in the minds of young and old. The old cliché: To know someone, you have to walk a mile in their shoes, is a cliché because it’s true. The reason fiction is fun is because you get to be someone else for a while, feel what they feel, think what they think.

What if you were on your way to school and you found a tiny envelope on the sidewalk. You opened it and discovered it was from a squirrel who lives in a tree on your block. What would the letter say? Is the squirrel happy? Does it like people? Or does it simply tolerate them, counting the laborious seconds until people are extinct and the squirrels can finally take over?

Letter writing also has a long history in literature: writers such as Alice Munro, Dave Eggers, Nikolai Gogol and Jonathan Safran Foer have used the technique with hilarious and heart wrenching results.

So. What if everything on Earth, each part of the ecosystem, had the ability to write a letter? What would those letters look like? What would they say? Would they change how we and others thought? Could they? Let’s try.

The Fun Part – Writing Your Letter.

The first thing to do is to decide who your letter is from. Who (or what) are you going to be while you write. You could be an animal, like a cricket, a parakeet or a muskox, Or you could be a thing,something nice like the ocean, clouds or a forest, or even something nasty like plastic, crude oil or gasoline.

It can be anything you’d like. Just try to pick something you imagine has a lot to say (be it good or bad) but just hasn’t had the chance (or the writing skills) to say it yet.

The letter can be a one-pager or longer if you find yourself with lots to say.

Some things to think about while you are writing:

• Who is it addressed to? This is important. Do you talk the same to your friends as you do your parents or teachers? No? Good. In writing (especially letter writing) you have to know your audience. So your letter could be addressed to the Prime Minister or your best friend, it could be a letter that’s going to be read to everyone on the planet in every language all at once or one that only one person is supposed to read. It’s up to you.

• This person you are sending the letter to, have you met this person before? If so, where? How long has it been since you last spoke? What has happened to you since then?

• Why are you writing? To ask a question? To transmit information? To get something? A job? Some money? Or are you trying to scare them? Or warn them of danger? Or is it all of the above?

• What do you think is important for the person to know about you? What do you do with your time, eat, think? How do you really feel?

• How will you end your letter? What ideas do you want to leave the recipient with? How will you sign your name? What is your name anyway?

This exercise can take up to an hour. You are allowed to write multiple letters or work on perfecting one. When finished, students have the opportunity to read their letters, or parts of them, to the class who will almost definitely meet them with applause, admiration, laughter, cheers and tears (if appropriate).